C20 Summit – Voicing and Realizing a Just Recovery for All 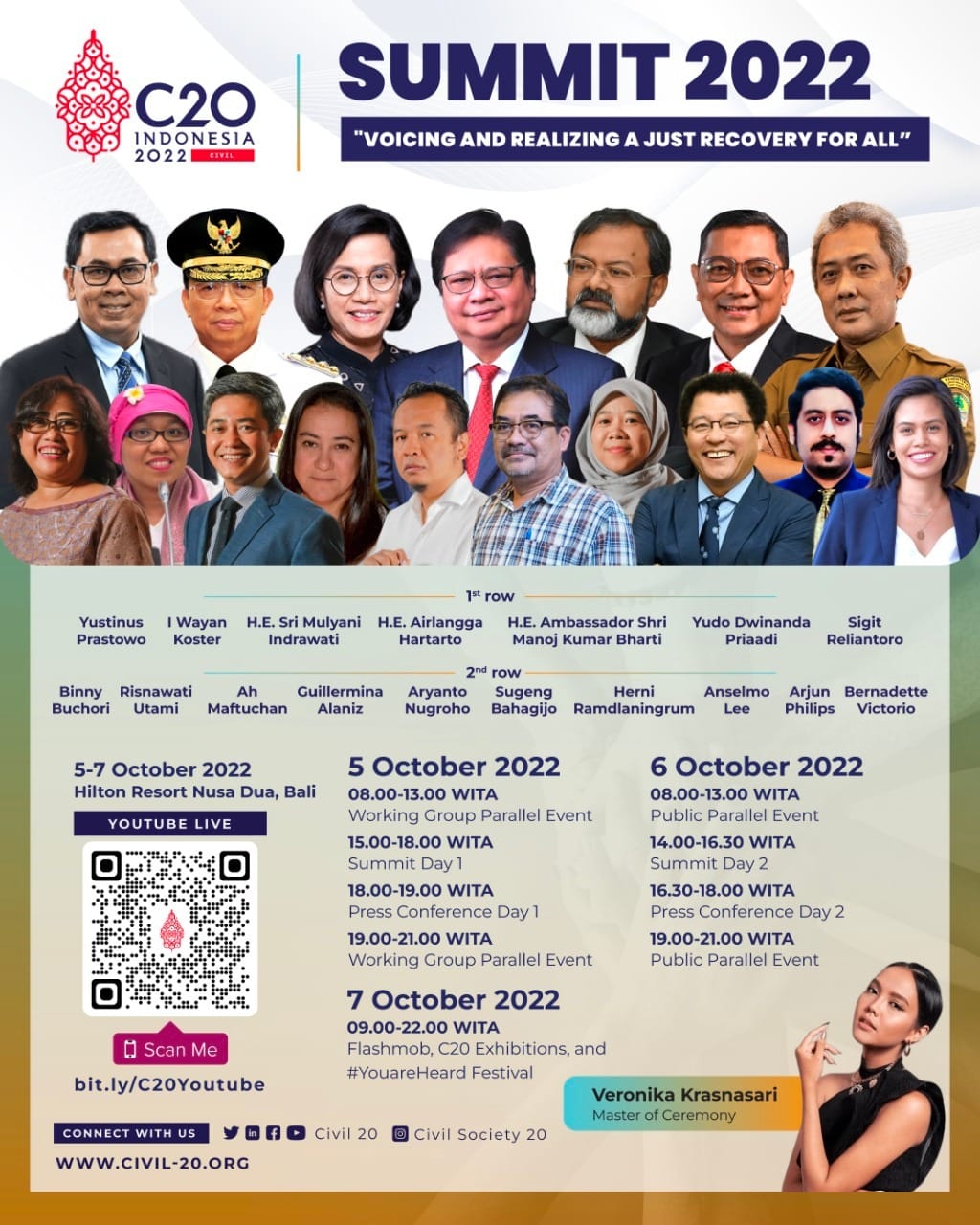 ASPBAE participated in this year’s Civil 20 (C20) Summit from 5-7 October 2022 in Bali, Indonesia. With the theme ‘Voicing and Realizing a Just Recovery for All,’ the Summit was a culmination of the C20 activities, which aim to raise the recommendations of civil society organisations (CSOs) and grassroots communities, and open a policy dialogue with G20 leaders and working groups. 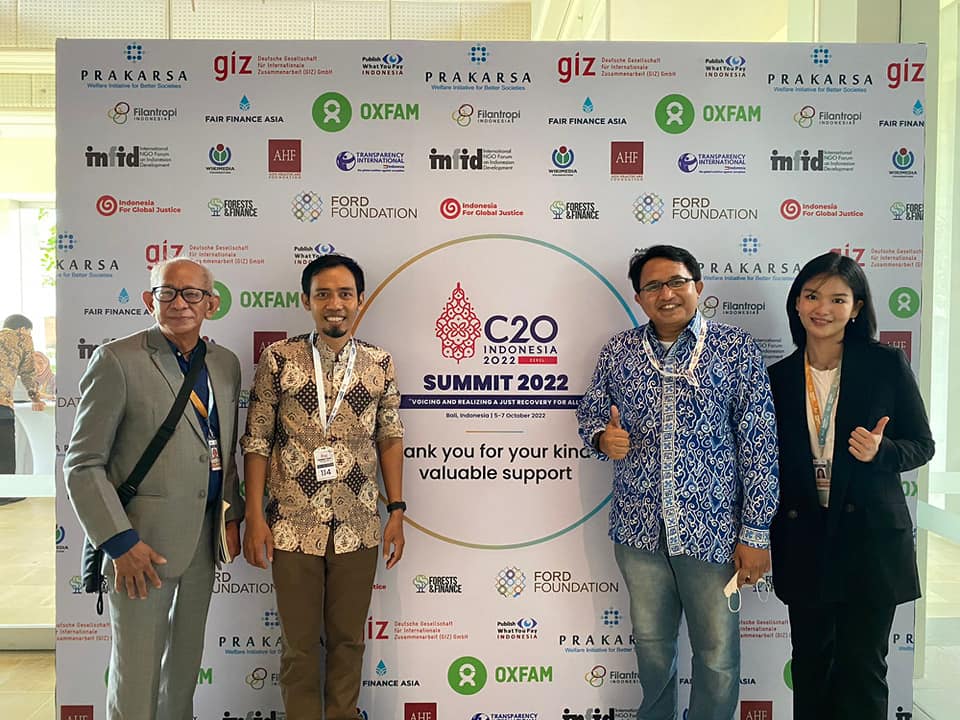 ASPBAE is part of the C20 Indonesia Education Sub-Working Group and has been actively engaging in C20 processes.

The Summit provided a space for civil society to engage in dialogue with the President of Indonesia, the G20 Leader, and the G20 Government of Indonesia in delivering the C20 Communique and Policy Pack. The Policy Pack – a document containing a series of policy recommendations on various issues – was handed over to the G20 on the opening day of the C20 Summit. 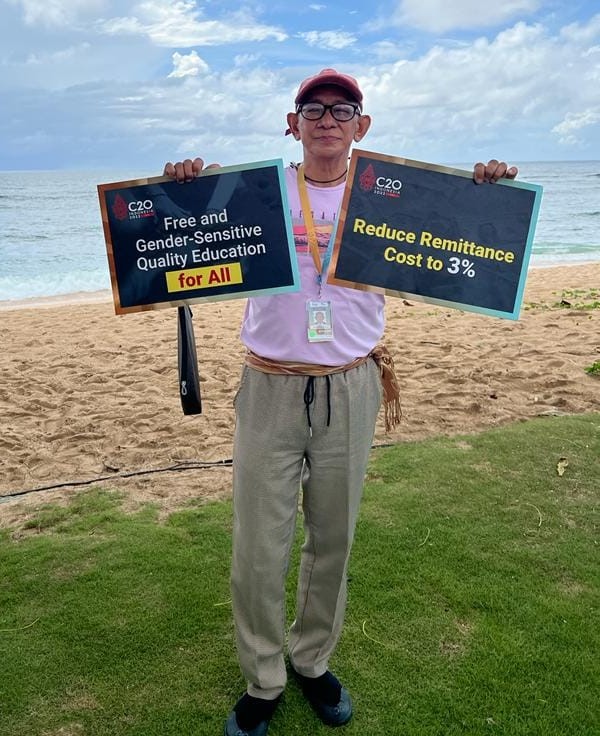 Day 1 of the Summit featured Working Group presentations on the priority recommendations. In her presentation, the Education Sub-Working Group’s Coordinator, Imelda Usnadibrata of Save the Children, called for increased education financing at all levels to meet the needs of the most marginalised children, youth, and adults.

Mulyani Indrawati, Minister of Finance, Indonesia, highlighted the need for strong leadership and collective action to respond to current challenges, such as war, inflation, debt, climate change, and food insecurity.

In 2023, India will take over the C20 Presidency. Manoj Kumar Bharti, Ambassador of India to Indonesia, underscored the importance of the C20 as an engagement group of the G20 and outlined the priority issues of C20 India, including digital transformation, disaster risk reduction, global skills gaps, and robust multilateralism, among others.

Day 2 of the Summit saw the launch of the C20 Policy Pack and Communiqué 2022 and the handover to the G20. The Policy Pack and the Communiqué are important outcome documents that formalise the demands of the C20 to the G20. Many of ASPBAE’s input and recommendations were integrated into the final Policy Pack, including the call to “progressively increase and guarantee education financing at all levels for the provision of equitable, quality, resilient, and gender-transformative public education systems.” 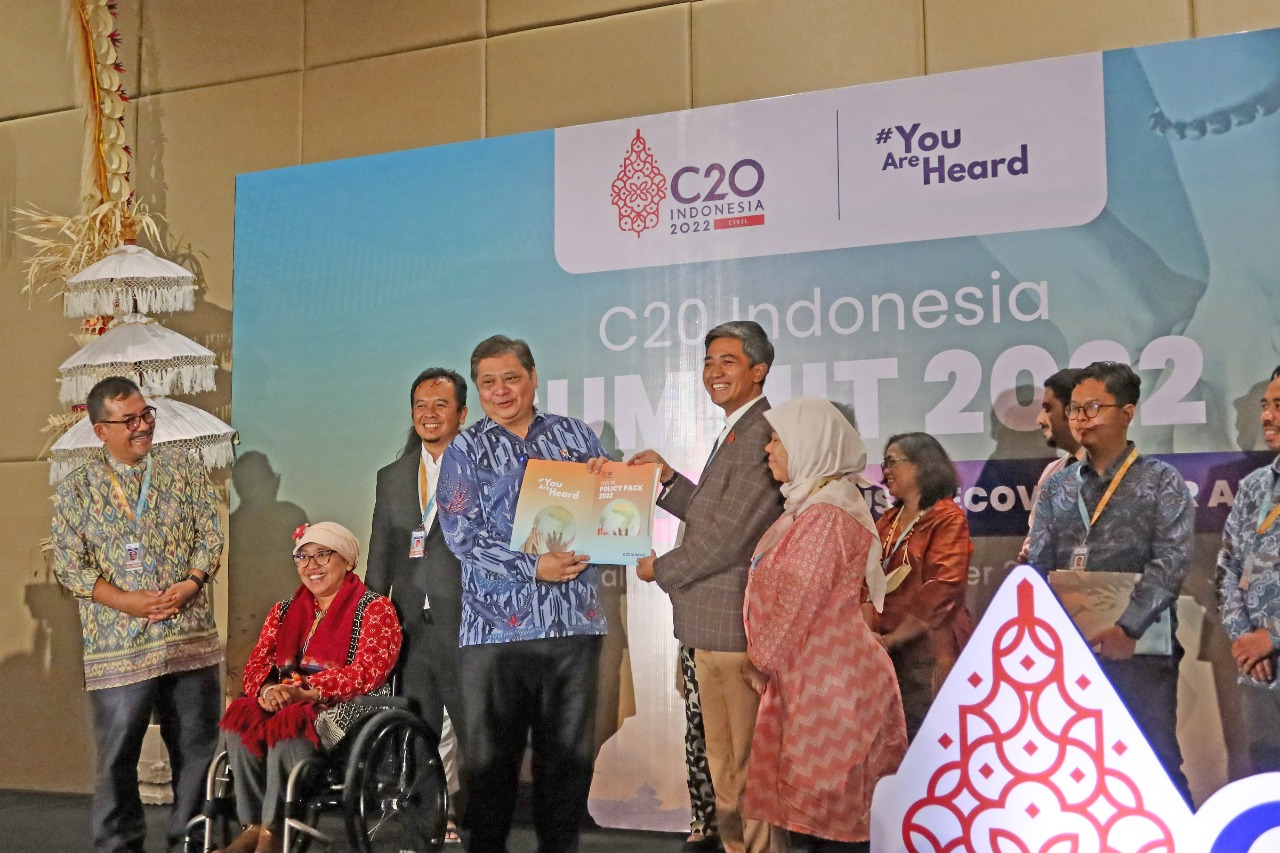 ASPBAE recommended that the voices of learners be included in decision-making processes to foster co-designing of transformative curricula, in developing flexible and accessible learning modalities with formal, informal, and non-formal education systems, including no- and low-tech solutions, and in promoting public provisioning and support for non-formal/vocational training, and informal/community-based education.

Airlangga Hartarto, Coordinating Minister for Economic Affairs and the Sherpa of the G20 on behalf of the President of Indonesia, said that governments need recommendations from civil society to strengthen the response to ongoing socio-economic challenges.

Bernadette Victorio, Steering Committee member, stressed that G20 leaders must uphold and protect the right to participate in decision-making that critically impact communities and livelihoods. She also encouraged G20 member countries to bear the responsibility of ensuring sustainable finance and fairer global taxation.

The C20 “flag + flower” and C20 Policy Pack and Communiqué were presented to the representative of India, which will take over the C20 Presidency for 2023. 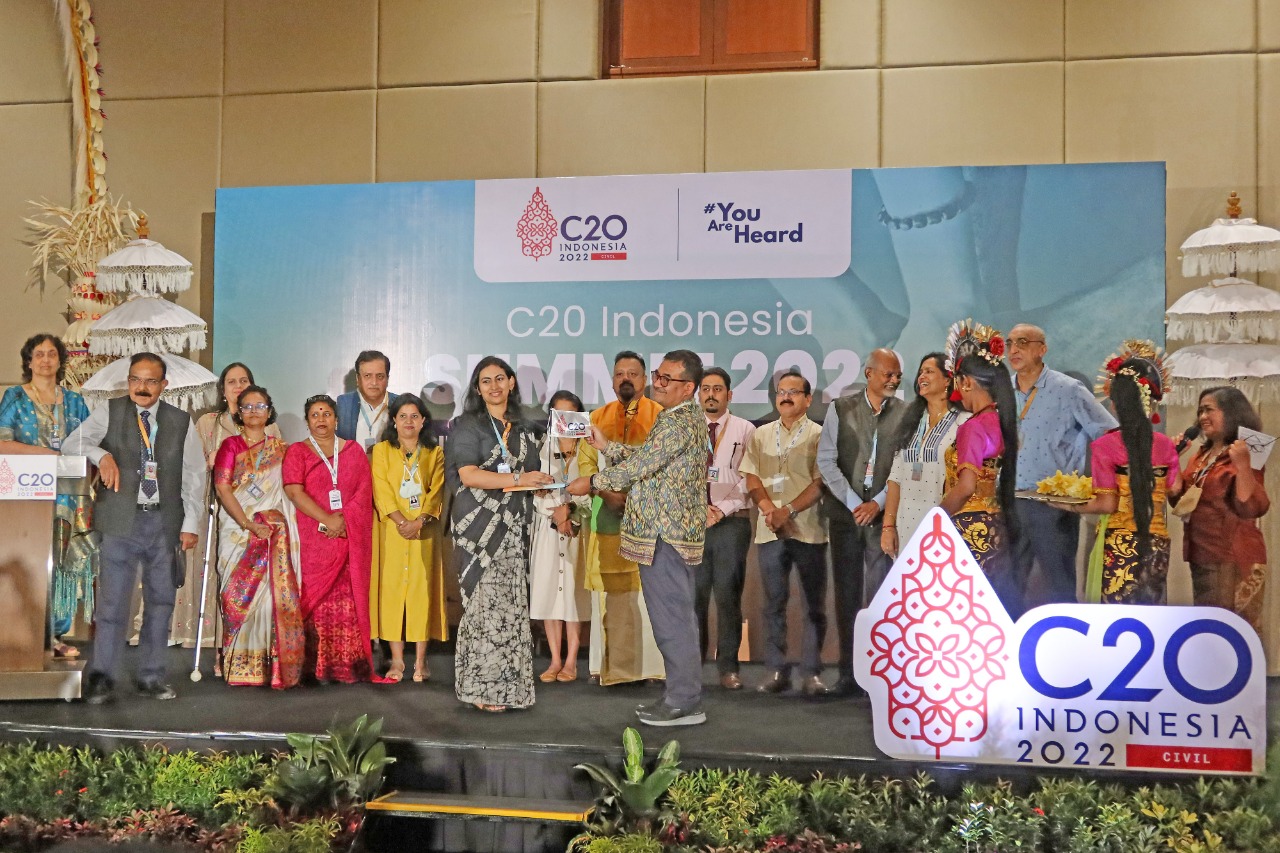 On the final day of the Summit, members of the C20 Working Groups enjoyed a flash mob as well as the oration/open mic that involved selected representatives of the Groups. As part of the Education Sub-Working Group, ASPBAE’s Lae Santiago and Anggi Nasution of Save the Children Indonesia participated in the open mic and highlighted the importance of equity, inclusion, access, and gender-transformative education. 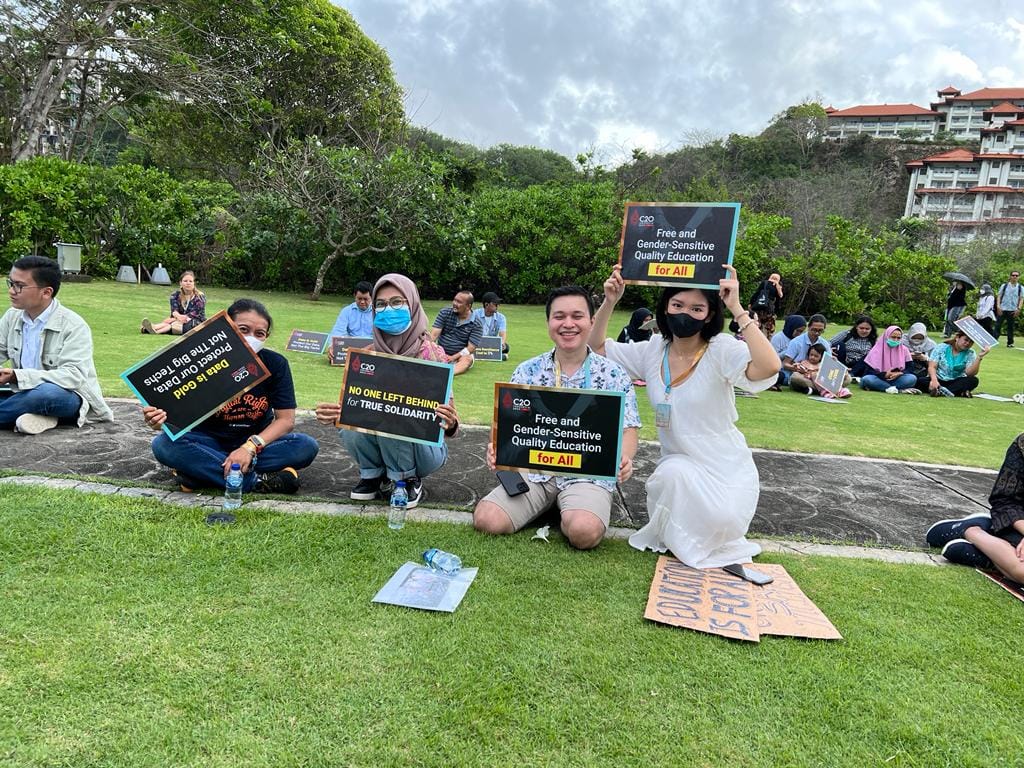